“Marching as to War” Why do American Evangelicals celebrate bloodshed? 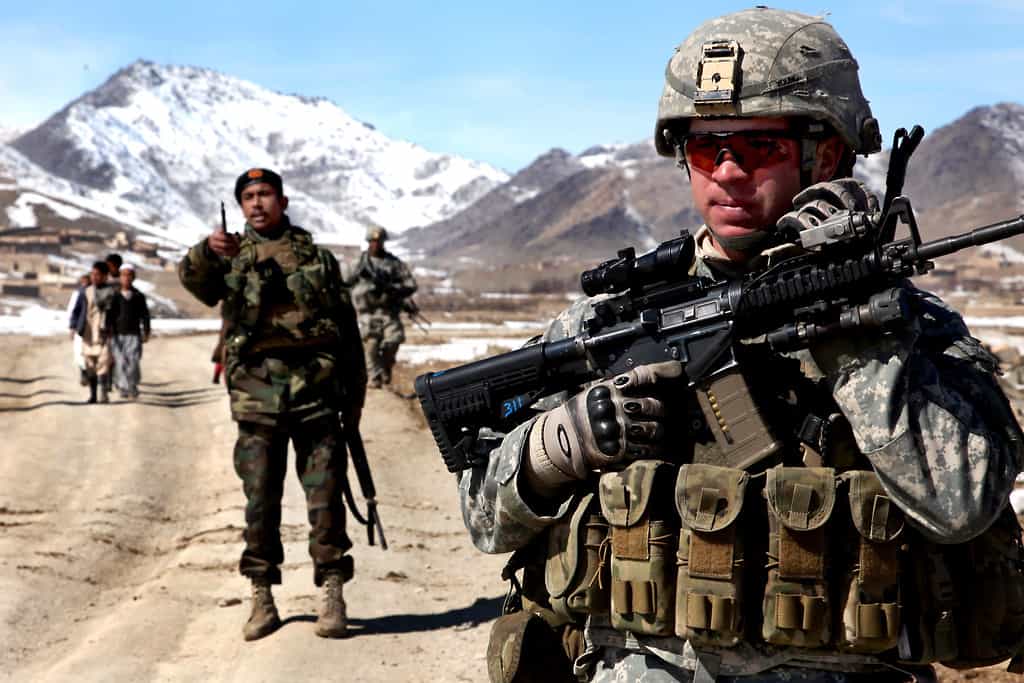 The tragic images coming out of Afghanistan in the wake of U.S. troop withdrawal is a reminder of the prophetic words of Dr. Martin Luther King Jr., “An eye for an eye leaves us all blind.”

Two decades ago, following the terrorist attacks of 9/11, a defiant President George W. Bush stood atop the still-smoldering rubble of the toppled twin towers and declared “the people who knocked these buildings down will hear all of us soon.” Just a few weeks later, the United States invaded Afghanistan, knocking down the Taliban regime in retaliation for providing haven to Osama bin Laden. It would be another decade before bin Laden was finally killed while hiding in Pakistan. However, in the interim, the United States launched another invasion into Iraq, stretching the bounds of justification under the umbrella term “War on Terror” to include the pursuit of Saddam Hussain and his purported weapons of mass destruction—weapons that were never found. The cost to benefit comparison of these actions to the United States in terms of American lives and global credibility is still being accounted for.

Strangely these actions were not only justified by most evangelical leaders, but they were also enthusiastically supported—even celebrated. When the Biden administration announced the final troop drawdowns would conclude this month, my social media feeds were once again flooded by evangelicals lamenting the decision. Many of the posts were peppered with ideations of “Praying for Christians” who were now reportedly being persecuted with the resurgence of the Taliban power. While it is true that we should pray for our Christian brothers and sisters who may face persecution under Islamic regimes, many of the initial reports of persecution were simply untrue. The outright lies aside, the sudden interest in praying for Afghanistan made me wonder why Evangelicals often cherry-pick between those deserving of prayers and those who are deserving of wrath. Why are we encouraged to pray for Christians but not for the number of Muslims who were killed at the hands of American bombs? What about the multitudes of men, women, and children, who were deemed expendable as collateral damage while advancing our national interests and values? Without broaching the philosophical “Just War” debates that have long plagued Christian traditions, it just strikes me as odd that those who claim to follow The Prince of Peace continue to be such warmongers. While evangelicalism endorses great sacrifices to convert one Muslim soul to Christianity, they simultaneously seem to find comfort in the taking of Muslim lives in the context of war. These values are incongruent at the least.

Thinking about these issues led me to reflect on my own Christian formations and how that informed a larger perspective that discounts the value of human lives in favor of the value of human souls. My evangelical heritage taught me that the most important characteristic of human existence wasn’t this temporal life, but rather the eternal soul. This led to a willingness to forgo what is seen as worldly amusements in this life in the expectation of the eternal bliss awaiting us in the next life. Our obsession was the saving of human souls by aggressively proselytizing them, and while we stopped short of converting them at the edge of literal swords, the use of rhetorical knives and other coercive weaponry was our blood lust. The unintended consequence of this training was that I no longer viewed others as possessors of the Imago Dei, but rather as a means to an eternal reward.

As a result, I became trapped in a series of transactional relationships without any depth of commitment because I was unwilling to value others for who they were. I was blinded only by my visions of what we all might one day be in a coming Kingdom where Jesus rewarded or punished us for our actions. My false eschatology informed by misguided theology robbed me of opportunities to know and be known by others. Worse yet, this became how I primarily viewed my relationship with God. God ceased to be a Being to know and love, and simply devolved into a glorified vending machine serving as a transactional means to a glorified end. If I inserted the correct change of personal piety, I expected that the godly goodies I ordered would be dispensed ex post facto. This set me up for a lifetime of vacillating between extremes of pride when that seemed to work, and most often despair when it didn’t. No amount of shaking and rocking the Divine vending machine would produce what I wanted most: heavenly validation of a life spent for God in exchange for happiness, contentment, and enteral bliss. As it turns out, I discovered God isn’t interested in bartering.

These issues are further complicated by an evangelical commitment to an eschatological understanding, based on a literal reading of Revelation, that seeks to hasten the slaughter of the armies of the world who dare to defy the nation of Israel. Why is it that dramatized literal interpretations of “Blood flowing to the top of horses’ bridles” dominate the bestsellers lists among Evangelicals, as hymns with imagery of war are sung with enthusiasm in our churches? Considering the human costs of war, shouldn’t we reconsider our ritual celebrations of its images as metaphors for the Christian life?

I believe there is a parallel between what was my pursuit of self-actualization via misinformed religious machinations and this country’s penchant for war. Our tradition of American exceptionalism, or believing that we are more deserving of God’s favor than other nations, undergirded by an evangelical disposition that individual Christians are more deserving than others of blessings, lends itself to a geopolitical hubris that almost always ends in disaster.

For the past two decades, American foreign policy has gambled with the lives of soldiers and civilians alike, betting the world is interested in buying what we are selling. Afghanistan has demonstrated that perhaps there are parts of the world that aren’t interested in transactional relationships with us. They remain unwilling to trade their culture and way of life for protection from American weapons of war but will commit themselves to playing the long game of history, patiently waiting us out until we finally decide to leave.

If we can’t find a way to correct America’s arrogant posturing toward the rest of the world and to change Evangelical traditions of transactional perspectives of humanity and God, we may end up with the world Dr. King warned us about, where the blind lead the blind and we all “fall in the ditch.”