Trump will be back, prophets say, not in four years, but this year 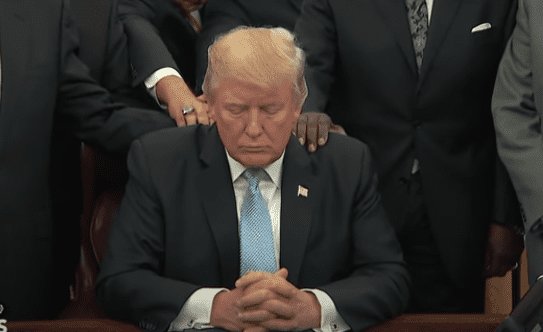 Before the election of President Joe Biden, a near multitude of self-proclaimed prophets put on their mantles and declared that former President Trump would be re-elected.

When that didn’t happen, however, an internecine conflict broke out among the charismatic movement. As Ministry Watch reported, things got nasty:

A major speaker in the movement calls it “the largest scale deception I’ve seen in 49 years of following Jesus.”

And yet another pastor is blasting parts of the movement as being “sick.”

Others who’ve apologized for getting it wrong have gotten accusations, curses, and even death threats.

“Over the last 72 hours, I have received multiple death threats and thousands upon thousands of emails from Christians saying the nastiest and most vulgar things I have ever heard toward my family and ministry. I have been labeled a coward, sellout, a traitor to the Holy Spirit, and cussed out at least 500 times. We have lost ministry partners every hour and counting.

Now, however, there’s a new push within the charismatic movement to double down on the proclaimed prophecies. Joe Biden may have been inaugurated in January, they say, but as Politico reports, they’re claiming in faith that Trump will be back in office this year.

“The January 20 inauguration date doesn’t really mean anything,” [California pastor Johnny] Enlow said in the January 29 video, which has gotten north of 100,000 views on YouTube.

According to Enlow, more than 100 other “credible” Christian prophets around the world had likewise declared that Trump, somehow, would be restored to power soon.

Indeed, Enlow was not alone out on that limb. Greg Locke, a Nashville pastor with a massive social media following, said after Trump’s loss that he would “100 percent remain president of the United States for another term.” Kat Kerr, a pink-haired preacher from Jacksonville, Florida, declared repeatedly last month that Trump had won the election “by a landslide” and that God had told her he would serve for eight years. In his video, Enlow went further. “There’s not going to be just Trump coming back,” he said. “There’s going to be at least two more Trumps that will be in office in some way.” Donald Trump, he proclaimed elsewhere, was “the primary government leader on Planet Earth.”

Following Trump’s election loss, a number of public prophets went on tours in contested states, leading prayer crusades even as the numbers turned in Biden’s favor. Some leaders, however, notably Kris Vallotton of nationally influential Bethel Church, apologized for being wrong but then later retracted their apologies. Vallotton claimed that being wrong wasn’t enough to disqualify him as a prophet:

“I take full responsibility for being wrong,” he said on Instagram. “There was no excuse for it. I think it doesn’t make me a false prophet, but it does actually create a credibility gap.”

Vallotton later reinstated his apology — on Jan. 8, two days after the attempted insurrection and assault on the U.S. Capitol.

Talk show host Sid Roth, as well as Jennifer LeClaire, the former editor of Charisma magazine (whose publisher, Stephen Strang, predicted that Trump would top 400 electors), also apologized, with LeClaire writing: “I believe some prophets who prophesied a Trump win never heard God at all. They merely tapped into the popular prophetic opinion because it was what so many in the church wanted to hear.”

Comments like these have prompted discussions around the charismatic world on podcasts, email threads, Twitter and Facebook. The overriding emotion in reading them is anger at the prophets—in some cases, for making false declarations and, in other cases, for apologizing for those declarations. Brown told me pastors have reached out to him asking how to handle the fallout in their congregations. Goll used words like “toxic,” “mudslinging,” “disappointment” and “disillusion” to describe the flood of invective from Christians who feel duped by false prophecies. But a sizable share of believers, at least those active online, seem to be holding out for a Trump resurrection sometime this spring.