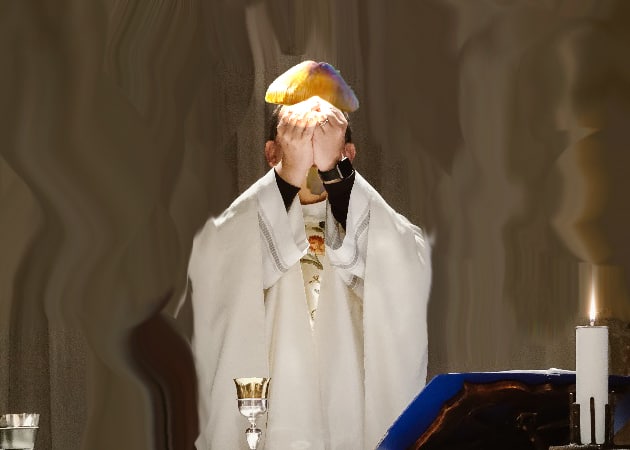 When the early Christians gathered together to worship, did they also, like, trip balls, man?

A new book from attorney and classicist Brian Muraresku — “The Immortality Key,” available from St. Martin’s Press  — alleges to document, “the role psychedelics have played in the origins of Western civilization, and the real-life quest for the Holy Grail that could shake the Church to its foundations.”

In an interview with Vox , the author says key to understanding his case is the fact that psychedelics were used in ancient Greece, one of the first cultures in which Christianity gained a footing.

In particular, he points to the Temple of Eleusis, dedicated to Demeter and Persephone, which used a potion called Kykeon to induce visions. In the Vox interview, Muraresku continues:

And so in 1978, this relatively controversial theory claimed that this magic potion was some primitive beer that was spiked with ergot. Ergot is the natural fungus from which Albert Hoffman himself was able to synthesize LSD all the way back in the 1930s.

Ergot grows on grains, and if our relationship with grains and barley and wheat and rye goes back at least 12,000 or 13,000 years, it stands to reason that some of that naturally infected grain could have made its way into a very intentional potion, to create these visions.

But what does this have to do with early Christianity? Muraresku points to an archeological find of a Greek colony in Spain, where an altar and terracotta heads belonging to Demeter and Persephone were found. A number of small chalices were also located at the site.

Researchers took these little chalices and tested them under optical microscopy and turned up the evidence for an ancient beer that was spiked with ergot. I mean, it fits precisely this crazy theory from 1978. And the only reason no one’s really heard of it is because this find was published in Catalan, the language of the archeologist, who has been on-site there since 1990, and she’s still there today.

I went out of my way to find something similar that could fit within Christianity, and lo and behold, also from 20 years ago, outside Pompeii, there was this ancient pharmacy that was unearthed. Inside the wine jars that were found there was a really unique witchy wine that was mixed with what seems to be opium, cannabis, and henbane, which is one of these very hallucinogenic Solanaceous plants. And in there also were the bones of lizards.

So there’s a potion straight out of Macbeth just sitting there in Pompeii, dated to 79 AD, exactly when the first generations of Christians would have been showing up south of Rome, to celebrate the earliest versions of the mass. It doesn’t tie this psychedelic tradition to Christianity specifically, but I think it’s proof of concept that the more testing we do, and the more excavations we do, we’re likely to find more organic evidence tying these traditions to the earlier Christians.

Muraresku said he knows there’s no hard evidence of psychedelic cults in early Christianity, but he believes the possibility is there and that they disappeared for the same reasons gnosticism ultimately disappeared — a combination of increasing orthodoxies among the faithful and attrition.