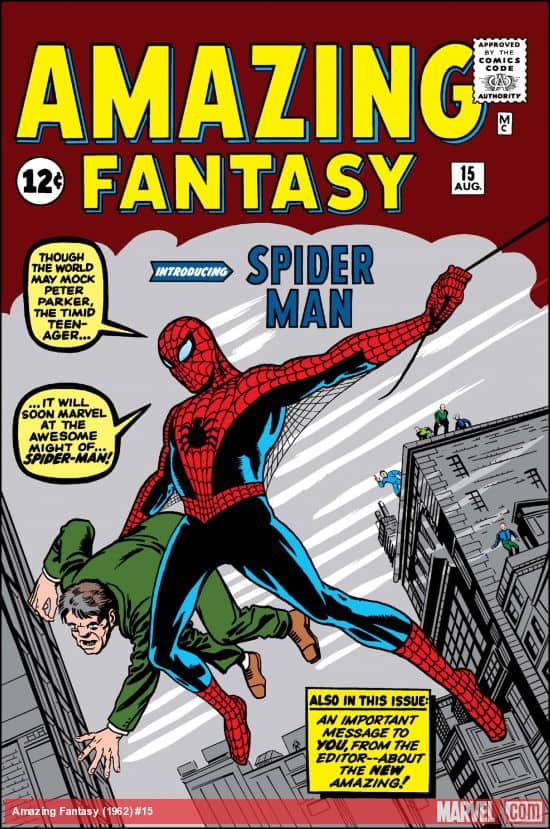 Spider-Man rose like the Phoenix from the pages of a dying comic, Amazing Adult Fantasy, which ran as an anthology published by Marvel Comics in 1961 and 1962. As the series neared its run in the summer of 1962, writer Stan Lee was charged with the task of crafting the series’ final story. Lee later recalled his frustration with the typical portrayal of young people as sidekicks in comics and heroes as super competent people who floated above real daily struggles. He envisioned a young character who would be a role model for readers. Lee’s young superhero would deal with the common struggles of everyday life as well as the complexities of being a superhero. Lee’s wife, Joan, encouraged him to stop complaining and take a risk with the convention defying character. Lee’s editor agreed to let him test the character since the series was coming to an end anyway. They retitled the comic Amazing Fantasy for the fifteenth and final issue. Today, an original mint condition issue is worth more than a million dollars.

Spider-Man’s origin story unfolds on a dark canvas. Blessed with amazing powers after being bitten by a radioactive spider, Peter Parker decides to use his powers to make money and possibly rise above his status as a high school social outcast. He marshals his brilliant intellect to create technologically sophisticated web shooters and a sleek costume that can still only be pulled off by the fittest of fans. Tragedy ensues when Peter allows a criminal to escape when he could have captured the fugitive. Peter tells the pursuing police officer that catching criminals is the cop’s job. He returns home to find that his Uncle Ben surprised a thief and was fatally shot. Spider-Man pursues the thief and captures him only to discover in the masterful final panels that the thief who shot his uncle was the same criminal he allowed to escape. As the devastated newly minted hero walks away into the night, Lee commented, “A lean, silent figure slowly fades into the gathering darkness, aware at last that in this world with great power there must also come – – great responsibility!”

The phrase ignited imaginations and inspired four generations of fans to be and do better. Spider-Man’s hero’s journey leads constantly through misunderstanding, slander, suffering, and sacrifice. Some spoilers do follow for the most recent Sony and Marvel cinematic collaboration, Spider-Man: No Way Home. Anyone shocked at some of the darker themes of the film can look back to the comic origins of the character and see that he has always walked in shadow as often, possibly more often, as he has basked in the light. Aunt May replaced Uncle Ben in this version as the inspirational center for Spider-Man going forward, but the poignancy of the reimagined moment still retained the emotional impact of the original story. Having given her life to serve others and urging her nephew to do the same despite the personal risks to them both, before she dies May speaks Lee’s credo that great power demands great responsibility.

One of the most powerful moments in the film unfolds as Tom Holland’s version of Peter Parker meets his alternate movie versions played by Andrew Garfield and Toby Maguire. They bond over their mutual losses and sacrifices as well as their shared powers. The new arrivals help the MCU Spider-Man find clarity as they recount their own brushes with tragedy and doubt. Both try to persuade Holland’s version to reject vengeance and Maguire’s Spider-Man physically intervenes to prevent him from killing Willem Dafoe’s Green Goblin in retaliation for Aunt May’s death. The film ends with a radical reboot of Peter Parker’s circumstances that leaves Spider-Man where Stan Lee first introduced him, a lonely crusader fighting with limited resources to be better and do better with the miraculous gifts he has been given.

The Christmas season prompts reflection on the nature of power. Mary’s revolutionary Magnificat in Luke’s first chapter resounds with a challenge to the inequities of unjust earthly kingdoms. Luke’s account continues with the appearance of humble shepherds at the birth of the messiah. Matthew’s account brings Magi from the east to marvel at the newborn king, providing the emphasis for Epiphany and bringing elites to bow alongside the humble. The gospels portray divine power restrained and directed towards human flourishing and salvation rather than personal aggrandizement. Luke depicts Jesus first and foremost as the Messiah who has come to “seek and to save the lost.” (Luke 19:10)

A very base and Machiavellian view of power has gripped our worlds and, sadly, far too many of our churches. It poisons our political discourse and frustrates our attempts to combat a deadly pandemic. This leaven penetrates to the heart of our popular Christian subcultures and threatens to infest the entire lump. Somewhere along the way too many of us decided that “real men” oppress the weak, treat women as appendages rather than persons, and freely inflict whatever thoughtless nonsense they want to spew on the world without restraint. Adolescent behavior and lack of restraint somehow became the order of the day and captivated a significant minority.

Maybe it’s appropriate that we turn again during this season to the story of a fictional adolescent who learned that whatever power we possess, be it great or small, was given for more than just our own personal fulfillment. Our gifts were not bestowed as gifts to us alone. The real gift lies in the opportunity to shed whatever light we can through the exercise of what we have to benefit others, even when, maybe especially when, that choice involves sacrifice and insecurity. Whatever we have to contribute, we make the world and ourselves just a little bit better when we use it for the flourishing of others. Power unharnessed and used solely for the selfish preservation of oppressive status quos and insular institutions is power abused. Letting others struggle without the benefit of our contribution to our common callings is power wasted. Power disciplined and directed towards the benefit of our fellow humans is power exercised as it was meant to be exercised. As Spider-Man learns, with great power, there must also come great responsibility.