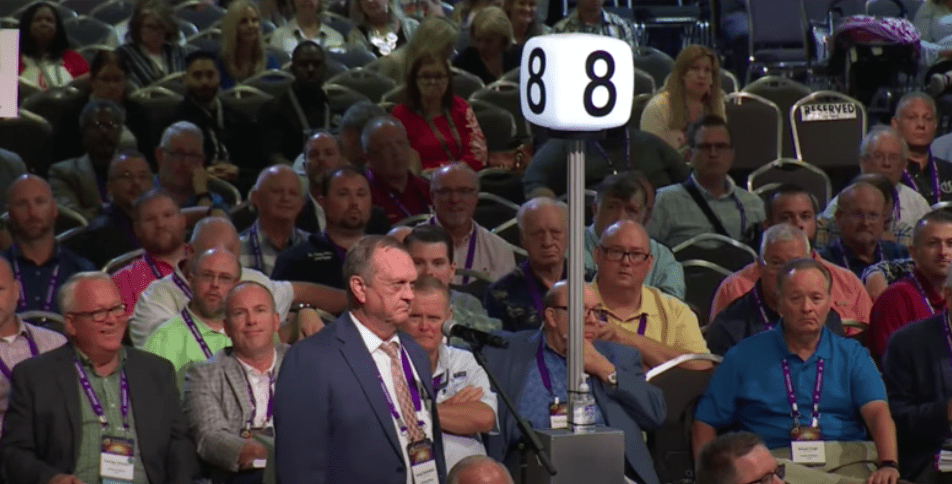 The Church of God (Cleveland, Tenn.) has voted to discipline any minister or denominational employee who uses feminine pronouns or titles for God.

The denomination adopted an amendment to its official Instruction for Ministers that would insert a paragraph reading, “No Church of God minister or employee of any church or institution associated with the Church of God shall violate Articles 1 & 2 of the Declaration of Faith by naming God using feminine pronouns or feminine titles. The usage of feminine titles or feminine pronouns for God in reference to the Father, Son, or Holy Spirit is a violation of the Declaration of Faith and shall result in ministerial disciplinary action.”

The proposal was presented as part of the denomination’s General Assembly.

Because of its wording, the change would affect not just direct church employees but also those who work at affiliated institutions, such as Lee University, the denomination’s flagship school located in the same city as its headquarters.

A theology professor who was at one time affiliated with Lee spoke out against the proposal, criticizing it as limiting the “necessity of using all finite methods available to us to make sense of the One who transcends them all.” Derenda Butler writes:

My first semester teaching Intro to Theology at Lee, I took a day to talk about how we talk about God, discussing the futility yet necessity of using all finite methods available to us to make sense of the One who transcends them all. We discussed things like metaphor and analogy (how God is like, but not literally, a rock), and then we discussed God and gendered language. Most of my students were surprised to discover that the Bible itself uses feminine imagery for God. I took great care to explain that this doesn’t mean that God is literally a woman, just that there are feminine qualities that help us better understand who God is and what God is like, just like how comparing God to a rock does so. And how, If this is the case, then we should also understand that using the more common masculine imagery for God does not mean God is literally male, since gender is a component of physical beings, which God is not. But that there is a sense in which God is like a man, the same way that God is like a woman, or like a rock. I could see some perplexed faces, so I brought the point home by addressing my students in this way: “Look around the room. About half the people in here are female. If God is literally male, are we really prepared to say that God is more like half the people in this room than the other half? Could we really say that men and women are equally created in the image of God?” After class, a male student approached me and said, “Ms. Butler, to be honest, I wasn’t sure I agreed with you that God isn’t literally male until you helped me see what that would mean for the women in the room. Thank you for making that point. It’s given me a lot to think about.”

Unfortunately, Lee students will no longer have opportunities for such formative moments because a group of men voted that COG employees (including Lee professors) are no longer permitted to use feminine language for God, the day after they voted that women don’t get a say in their own denomination’s decisions. THIS is why theology matters. THIS is why the language we use for God matters. Without exposure to feminine language for God, boys grow up to be men who think they know better than women, that masculinity is closer to divinity than femininity.

Dear Church of God, please let me be clear:

The Spirit is moving among the women in your denomination, and She will not be boxed in or silenced.

The Assembly also voted on another gender-based measure, which would have allowed female ministers who had achieved the same level of credentialing as male bishops a vote at the Assembly even if it would not have bestowed the title of bishop upon them.

In the rationale for the vote, the presenter said that calls for ordained women ministers to have a vote in the International General Council sessions at the General Assembly have increased. It had previously been discussed at the 2018 General Assembly.

The presenter said that under the proposed change:

The resolution as presented to the Assembly read:

That we amend page 61, S2. BYLAWS OF THE CHURCH OF GOD, ARTICLE VI, 2. INTERNATIONAL GENERAL COUNCIL, Members, by inserting after bishops of the Church of God and General Council-certified female ordained ministers who have fulfilled the same age requirements, experience and equivalent testing of the ordained bishop credentials as contained in S22. ORDAINED BISHOP, II., Qualifications of Ordained Bishops, who shall comprise its voting constituency.

So as to read:

The International General Council is composed of all ordained bishops of the Church of God and General Councilcertified female ordained ministers who have fulfilled the same age requirements, experience and equivalent testing of the ordained bishop credentials as contained in S22. ORDAINED BISHOP, II., Qualifications of Ordained Bishops, who shall comprise its voting constituency.

Discussion of the proposal was passionate, with one male speaker in favor of the measure saying, “The time is now to show that we value the gifts of our spirit-led and spirit-filled sisters.”

Another speaker, who was against the proposal, said he suspected that the proposal was a Trojan horse to bring up past theological discussions.

“This is a backdoor to get into something we have discussed four times, about whether we want to ordain women bishops and let them hold various offices,” he said. “How many times do we have to re-examine the scriptures, rediscuss it, revote on it? It seems like no matter how many times we vote on it it is coming back.”

You can watch the presentation of the resolution and assembly discussion here:

The Assembly did not adopt the measure as recommended. The vote required a two-thirds majority, but did not receive even half of the vote, with 775 voting against it and 755 voting in its favor.

Photo: An attendee speaks about the proposal to allow certain credentialed women a vote at the Church of God General Assembly (Screencap/YouTube)