Max Lucado was invited to preach at the National Cathedral. What that means to LGBT people is still being discussed. 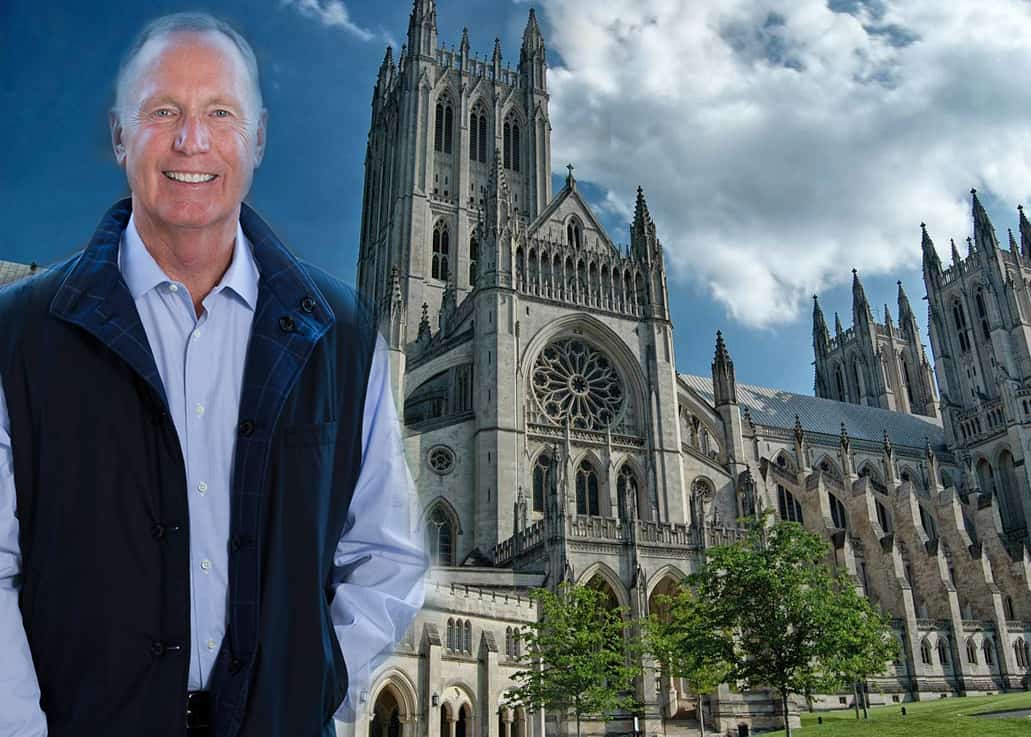 Until last week, Pastor Max Lucado was best known for authoring books on topics such as helping modern readers defeat, “their own giants.”  Over the past week, however, Lucado’s reputation as a public preacher took a beating — or a bolstering, depending on perspective — after he was invited to speak at the Washington National Cathedral.

The Episcopal Church-affiliated National Cathedral is one of the United States’ best-known places of worship, and it has provided streaming worship services throughout the pandemic. Placing a well-known pastor — Lucado has sold more than 120 million books — in the pulpit during a virtual broadcast to preach about “how God can bring calm to our chaos,” may have seemed like an easy choice.

After the announcement that Lucado would speak was made, however, protests started to flow in online and to the Cathedral dean’s office. More than 1,600 people signed a petition requesting that the invitation be rescinded. The petition says in part:

Fear-mongering and dehumanizing messages from powerful speakers like Lucado have been used to justify rollbacks of LGBTQ rights and to exclude LGBTQ people from civil protections and sacred rites. To our knowledge, Lucado has not publicly renounced these views.

Matthew Shepard’s remains were entrusted to the care of this cathedral. Inviting a man who preaches the kind of dangerous theology that promotes oppression of and violence toward the LGBTQ community does not honor that trust nor serve his memory.

If Lucado wishes to use this opportunity to renounce his hateful views, this is not the appropriate forum or context. This is not an opportunity for easy healing or “bringing together,” as though the question of the full belovedness of LGBTQ people is a simple argument or difference of opinion. Lucado has inflicted serious harm. If healing is to take place, Lucado has much work to do before it can begin.

In particular, those who protested pointed to Lucado’s July 2004 column “What God Says About Gay Marriage”.  (Notably, Crosswalk.com, where the column was published, now has a note that says the essay was taken down at the owner’s request. It is still available, however, through archive.org.) One passage that raised ire from those protesting the invitation reads:

How will homosexuality impact our culture? What about the spread of disease? If gay lifestyle and gay marriage is endorsed – what follows? Polygamy? Legalized incest? If we can’t draw a line, will lines be drawn at all? Many wrestle with such questions.

In another place in the essay, Lucado appears to imply that legalizing gay marriage could lead to beastiality:

If they recognize gay marriage, what will keep them from the next step? Who’s to say that one man can’t marry five women? Or two men and two women? How about a commune marriage? Or a marriage between a daddy and a daughter or a woman and a giraffe? Don’t underestimate the evil bent of the human heart. In 1972, the National Coalition of Gay Organizations demanded the “repeal of all legislative provisions that restrict sex or number of persons entering into a marriage unit; and the extension of all legal benefits to all persons who cohabit regardless of sex or numbers.” Rejecting God’s law leads not to a belief in nothing-but a belief in everything.

“Our commitment to our LGBTQ brothers and sisters is unshakable and unchanged,” Hollerith said. “We believe the Gospel calls us to nothing short of full embrace and inclusion.” Hollerith continued that he understands the concerns about Lucado’s past statements on LGBTQ issues and doesn’t agree with those views, but “repairing the breach” starts with listening to people who disagree.

“When we only engage with those with whom we agree on every issue, we find ourselves in a dangerous (and lonely) place,” Hollerith said. “My hope is that all churches and faith communities will find ways to open their doors to perspectives different from their own.”

Responding in kind, others said that The Episcopal Church’s stance on LGBTQ+ inclusion isn’t a matter of dialogue, and that inviting someone to the pulpit is, in some ways, endorsing their message. ENS continues:

“I just think this is a staggering display of presumption on their part,” said Jim Naughton, a former canon for communications with the Diocese of Washington who served under then-Bishop John Chane from 2002 to 2009. Naughton, now a partner in Canticle Communications, spoke to Episcopal News Service by phone on Feb. 5.

“Max Lucado does not have any problem making himself heard. He does not need the cathedral, the pulpit of Washington National Cathedral, to reach his audience,” Naughton said. “The issue is whether Washington National Cathedral wants to give its imprimatur to him and wants to extend the prestige of its pulpit. … I find it incredibly disrespectful.”

Later, the Cathedral responded by asking the Rt. Rev. Gene Robinson — who was the first openly gay clergyman ordained a bishop in The Episcopal Church — to preside at the alter during the same service that Lucado was to preach for. ENS reports:

“At the Feb. 7 service, during announcements made after the peace, Robinson addressed the more than 6,000 people viewing the cathedral’s livestream. “To those of us who are LGBTQ, while a lot of us are still in pain, while a lot of us have experienced some awful things in our lives” – Robinson paused before emphasizing his central message – “we’ve won.”

“We’ve won. We know how this is going to end,” he continued. “This is going to end with the full inclusion of gay and lesbian, bisexual, transgender, queer people, nonbinary people, all kinds of people, in the church and into the society. We work every day to make that true, but we know how it ends.”

Lucado’s sermon and comments did not address the controversy. Christian Headlines reports:

Lucado’s sermon focused on the Holy Spirit’s role in granting the Christian peace during anxiety.

The discussion of how to understand the invitation has continued since the service. Bro. Todd Aquinas van Alstyne, a friar in the Anglican Order of Preachers (a Dominican-aligned apostolic order with The Episcopal Church), said in a Facebook post  that the idea of sharing the pulpit during the divine liturgy undermines the Reformed Catholic tradition of the Episcopal-Anglican communion:

Preaching is different than a lecture or commentary: it is a means of grace. Faithful preaching has the power to convict, teach and transform. There is certainly a time and place to discuss, debate and discern differing views, both within the Christian tradition and in dialogue with other religious and secular perspectives. But the Mass is not the time for a free exchange of ideas. It is not the time we debate. It is not a forum for all kinds of views. No: the Mass and especially the sermon is a time for building up the people of God and exclusively for sharing the gospel by an ordained or licensed person, someone called to and charged with the work. In the context of an Episcopal service, this should be done by an Episcopalian or by someone from a denomination that is in full communion with the Episcopal Church. Following the sermon we reaffirm what we have heard by the recitation of the Nicene Creed: how can we do this when the sermon itself does not reflect the teaching of the Episcopal Church?

Because we hold the word and the sacrament in equal tension, it seems to me strange when we invite someone outside of our tradition into the pulpit. (It would be equally strange if we would invite someone to preside at the Eucharist who is not an Episcopal priest or clergyperson from a denomination that we are in full communion with.)

Van Alstyne continued by noting that, the case of people who are in communion with The Episcopal Church, the disagreement is a family matter. That’s different from inviting in a stranger, he said:

As a gay man it troubled me that our national cathedral invited an overtly anti-gay preacher who has inflicted through his writing and teaching harm to me and my community. (And before you attempt to throw Archbishop Justin Welby or other more conservative Anglicans in the mix, remember my first point. Justin Welby is an Anglican.) And while he holds to a more “traditional” view of marriage, he has not linked my identity to pedophilia as Lucado has. Bridges between Christians are important, the Anglican tradition is a big tent: but inviting a person into our pulpit who accuses whole groups of faithful Episcopalians of this kind of horrific sin is completely unacceptable.

The cathedral staff paraded out retired Bishop Gene Robinson (who is gay) to give themselves air cover. Bishop Gene did not speak for me. We must be quick not to canonize him as the authoritative voice of LGBTQ Episcopalians. He and the cathedral staff attempted to placate us by reminding us that the cathedral was intended to be “a house of prayer for all people”. That is true. Everyone is invited into the Church, invited to pray alongside us. But not everyone should be invited to preach — just as not everyone is authorized to preside at the Eucharistic feast.

As a gay Episcopalian, I feel that I need to apologize to people both within and without our Church for these actions. The message sent is that we are not truly inclusive of all people: that we are willing to give a platform to someone who espouses some of the most hurtful and wrong stereotypes of LGBTQ people in exchange for celebrity. It doesn’t line up with what our Church teaches — that you are loved regardless, or even especially, as a person on the margins of society. I’m sorry.

Now that the service is over, others are also saying it is time to discuss what Lucado’s visit meant. ENS shares the Rev. Susan Russell’s thoughts on the invitation:

She calls the cathedral’s decision to invite Lucado an “unforced error,” after apparently failing to uncover his past anti-LGBTQ statements. She dismisses arguments that the controversy casts doubt on the church’s commitment to inclusion for all people.

Russell hopes the reaction to Lucado’s guest sermon will be a “teachable moment” for the church and for the nation, at a time when many Americans have been traumatized by political divisions. And she supports campaigns like The Episcopal Church’s “From Many, One,” which encourage Episcopalians to engage in open, nonjudgmental conversations with people who have different beliefs.

Russell recently participated in a one-on-one conversation with Central Florida Bishop Greg Brewer as part of “From Many, One.” Brewer is one of a handful of Episcopal bishops who do not personally condone same-sex marriage but have made accommodations to enable gay and lesbian couples to marry in their dioceses.

“I think what happened this weekend at the cathedral has been, in some ways, a wake-up call,” Russell said, “to moving us forward both as an inclusive church … but also in engaging in conversation across difference in ways that are healthy.”