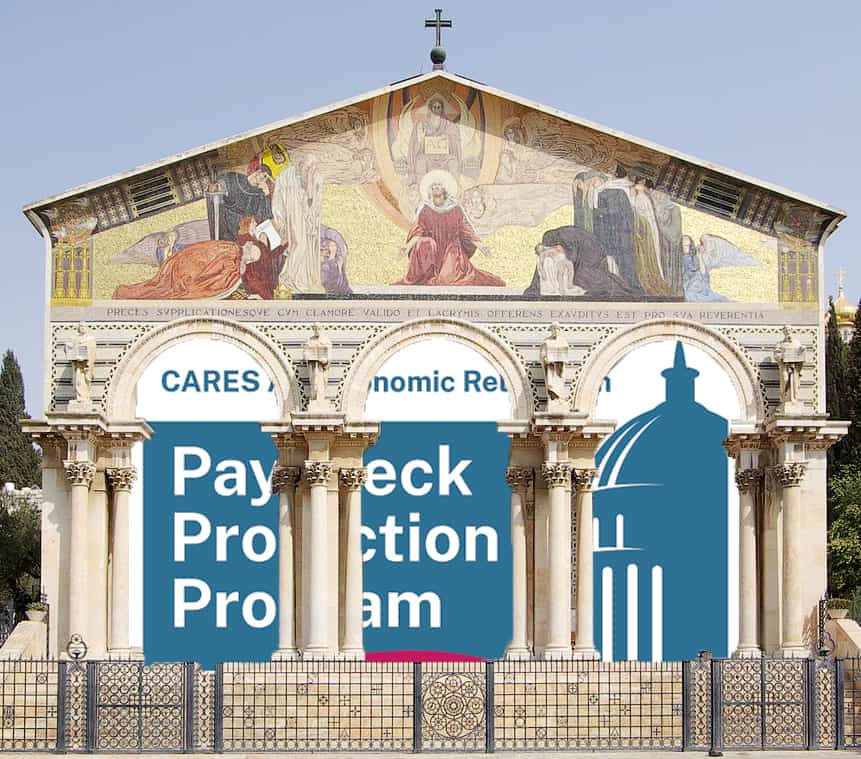 What should churches that have been hit by a slump in giving from those in the pews do to generate enough revenue to keep their doors open?

When many church congregants cannot attend services during the pandemic and many more are currently without work and therefore can’t give, that’s a serious question facing many congregations today. It’s especially pressing for churches that also operate day cares, food banks or other community services.

When former President Donald Trump and Congress approved the Paycheck Protection Program, it was intended to provide loans, some of which can be completely forgiven, “to help businesses keep their workforce employed during the Coronavirus (COVID-19) crisis.”  Among those who applied were churches, who — though technically non-profits — often have part- and full-time employees.

Using some very raw calculations, a church that qualifies will probably receive a forgivable loan that is equal to about 10 percent of its entire yearly budget. If your annual church budget is $500K, the amount is about $50K. If your budget is $2M, Uncle Sam’s gift would be approximately $200,000.

To that end, the Associated Press reports that the Catholic Church may have been the single largest beneficiary of PPP funds:

Overall, the nation’s nearly 200 dioceses, where bishops and cardinals govern, and other Catholic institutions received at least $3 billion. That makes the Roman Catholic Church perhaps the biggest beneficiary of the paycheck program, according to AP’s analysis of data the U.S. Small Business Administration released following a public-records lawsuit by news organizations. The agency for months had shared only partial information, making a more precise analysis impossible.

Already one of the largest federal aid efforts ever, the SBA reopened the Paycheck Protection Program last month with a new infusion of nearly $300 billion. In making the announcement, the agency’s administrator at the time, Jovita Carranza, hailed the program for serving “as an economic lifeline to millions of small businesses.”
Church officials have said their employees were as worthy of help as workers at Main Street businesses, and that without it they would have had to slash jobs and curtail their charitable mission as demand for food pantries and social services spiked. They point out the program’s rules didn’t require them to exhaust their stores of cash and other funds before applying.

The AP report points out, however, that in some instances dioceses had significant endowments at their disposal when they applied for the program:

In Kentucky, funds available to the Archdiocese of Louisville, its parishes and other organizations grew from at least $153 million to $157 million during the fiscal year that ended in June, AP found. Those same offices and organizations received at least $17 million in paycheck money. “The Archdiocese’s operations have not been significantly impacted by the Covid-19 outbreak,” according to its financial statement.

In Illinois, the Archdiocese of Chicago had more than $1 billion in cash and investments in its headquarters and cemetery division as of May, while the faithful continued to donate “more than expected,” according to a review by the independent ratings agency Moody’s Investors Service. Chicago’s parishes, schools and ministries accumulated at least $77 million in paycheck protection funds.

Up the interstate from Charlotte in North Carolina, the Raleigh Diocese collected at least $11 million in aid. Yet during the fiscal year that ended in June, overall offerings were down just 5% and the assets available to the diocese, its parishes and schools increased by about $21 million to more than $170 million, AP found. In another measure of fiscal health, the diocese didn’t make an emergency draw on its $10 million line of credit.

Responding to the report in America Magazine, Jesuit priest the Rev. Bill McCormick argued that churches — and church organizations such as Catholic Charities, which are connected to the diocese — were not only entitled to a chance to apply, but by doing so were in keeping with the program’s goals:

It should be noted that these Catholic entities were well within their rights in applying for these funds, and in doing so achieved the very outcome envisioned by the program (that is, avoiding layoffs and a deeper economic downturn). Moreover, the report’s characterization hardly does justice to the diversity of the church, let alone to the many good works and dedicated employees the P.P.P. money is supporting. (Full disclosure: America Media applied for and was approved for a Paycheck Protection loan.)

The assumption in these A.P. stories is that the church is primarily or only a self-interested institution composed of leaders motivated by power. The A.P. analysis suggests that the Catholic Church is just another rent-seeker in the U.S. political sphere: one more corrupt institution that the public cannot trust and the government should not fund.

But, McCormick responds, it’s important that while little-c churches are affiliated with the capital-C Church, individual parishes and ministries are actually financially solo institutions.

“To the extent that the church is an institution, however, it “is not a monolith,” as America’seditor in chief, Matt Malone, S.J., wrote, but “a network of affiliated but legally and financially independent institutions. There isn’t a parish in the country that employs more than 500 people on its pastoral staff; and it is the parish, not the diocese, that has to make payroll for the parish staff each month.”

Viewed globally, the church is a multilayered, pluralistic constitution of the laity and priesthood, parishes, dioceses, episcopal conferences, religious orders and lay movements, ordinariates and personal prelatures, the College of Bishops, the College of Cardinals and, of course, the papacy. Not to mention the various charitable organizations that work through and with these entities, including schools, hospitals, homeless shelters and social services centers. However one breaks it down, it is misleading to suggest that one institution called “the Catholic Church” received $1.5 billion.

The Catholic Church is hardly alone in applying for PPP funds, though as Baptist News Global reports, some were hesitant to move forward with filling out the government paperwork and tethering themselves to federal loans:

To some degree, all of that weighed on Travis Collins, pastor at First Baptist Church in Huntsville, Ala., last spring as his staff considered applying to the U.S. Small Business Administration’s Paycheck Protection Program, or PPP.

“During the conversations about taking the loan, I was one of the more hesitant ones,” he said. “But I gave in because I just don’t know what the future holds.”

The dilemma at First Baptist, Huntsville was tied in part to keeping its early education ministry with 42 employees afloat, as well as avoiding layoffs for the church’s 38 staff members.

“With no kids being there and no revenue coming in, we wanted to keep a paycheck going to every single employee,” [FBC Huntsville Executive Pastor Jeff] Reasons explained.

The Interdenominational organization The Church Network has monitored how its members respond to the PPP, and most applied because they just weren’t sure what the future holds. Some churches, however, didn’t keep the funds.

“A vast majority of our congregations have gone the PPP route. They have applied, and the vast majority have gotten the money. They saw the funds as a security blanket,” [said Phill Martin, CEO of TCN].

Some have changed their minds, he added. “A few made the decision to return the money because they were not experiencing the declines in giving they initially anticipated.”

Approaching the issue from an eagle-eyed view, Costas warned in his Christianity Today piece that churches needed to consider not what is best for their bottom line but also for what was best for the community.

A large and prosperous church that takes a subsidy of $300,000 because their giving is down 15 percent may be making it more difficult for smaller inner city churches whose finances are devastated and need the funds just to survive. It could also jeopardize the fates of many small businesses too. I have done some very rough calculations and its quite possible that if most churches take advantage of PPP loans, it could easily capture one third of the entire $350 billion allocation.

There are socio-economic and social justice issues here that must be considered by suburban churches who may drain grant money away from those who need it more.

I believe the decision to apply for and receive PPP funds is one of the most important issues the church will face in this decade. It will set a precedent for the future and may, in time, hinder the mission of the church when the strings attached to government funds are not consistent with Scripture. It will impact how the unchurched view us, and how our own members respond to our spiritual leadership.

The issue, Costs concludes, is not just about money. It’s going to be a matter of faith and prayer.