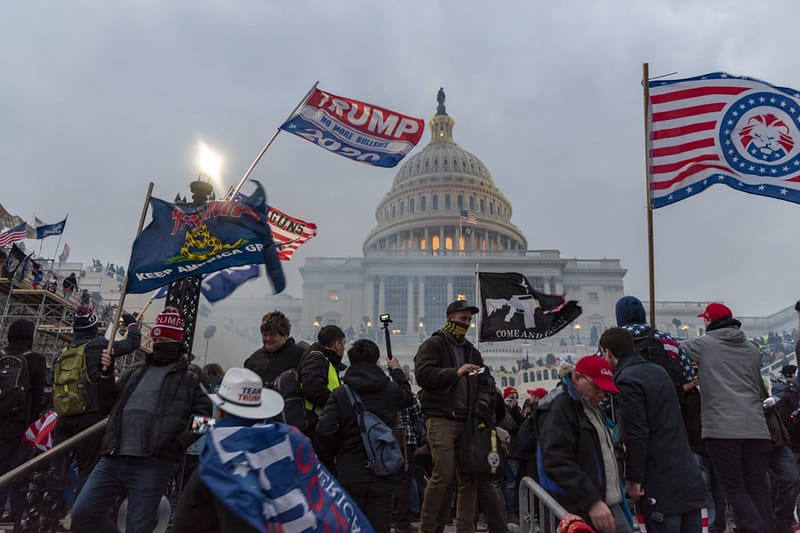 On January 6, 2021, the entire world were bystanders as Donald Trump sent his supporters to the U.S. Capitol where they placed the entire building under siege. Approximately 2500 Trump supporters attempted to overthrow the United States government, by overturning the election results through methods of intimidation, violence, vandalism, trespassing and pure mayhem.

There have however been numerous hoaxes, conspiracy theorists, and extremist groups that attempt to paint a false picture on the events of that day obfuscating the reality of that deadly day. A year after the insurrection the misinformation still abounds.

Claims that the rioters were members of antifa went viral first, only to be overtaken by a baseless claim blaming FBI operatives. Other theories say the rioters were peaceful and were framed for crimes that never happened.

“Dozens of police officers were severely injured. One Capitol Police officer who was attacked and assaulted with bear spray suffered a stroke and died a day later of natural causes.“

“Former Metropolitan Police Officer Michael Fanone, who rushed to the scene, said he was “grabbed, beaten, tased, all while being called a traitor to my country.” The assault stopped only when he said he had children. He later learned he had suffered a heart attack. Fanone resigned from the department in December 2021”.

CLAIM: TRUMP DID NOT ENCOURAGE THE RIOTERS

“Trump may now want to minimize his involvement, but he spent months sounding a steady drumbeat of conspiracy theory and grievance, urging his followers to fight to somehow return him to power”.

CLAIM: ASHLI BABBITT WAS KILLED BY AN OFFICER WORKING FOR DEMOCRATS

“Babbitt died after being shot in the shoulder by a lieutenant in the Capitol Police force as she and others pressed to enter the Speaker’s Lobby outside the House chamber”.

“Babbitt, a 35-year-old Air Force veteran, was unarmed. An investigation cleared the officer of wrongdoing”.

“The Capitol Police Department protects all members of Congress, as well as employees, the public and Capitol facilities. The officer wasn’t assigned to any particular lawmaker”.

CLAIM: THE JAN. 6 SUSPECTS ARE POLITICAL PRISONERS AND ARE BEING MISTREATED

“No, they are not, despite some assertions from members of Congress”.

“J6 defendants are political prisoners of war,” Rep. Marjorie Taylor Greene, R-Ga., tweeted in November. She said she had visited some suspects in jail who complained about the food, medical care and “re-education” they were receiving in custody”.

“Rep. Paul Gosar, R-Ariz., said the Justice Department was “harassing peaceful patriots” by investigating their involvement in the insurrection”.