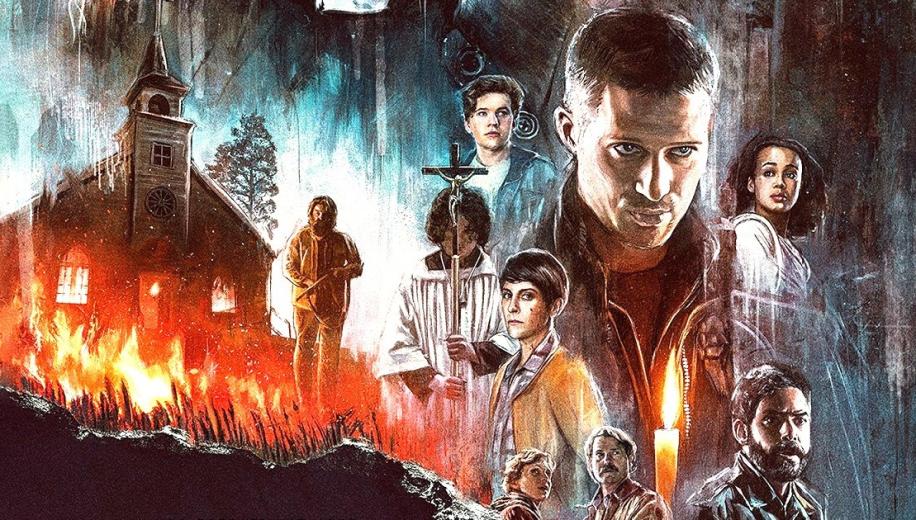 Mike Flanagan’s Netflix series Midnight Mass presents a chilling allegory on faith, fanaticism, forgiveness, family, and friendship. Spoilers follow, so beware if you haven’t seen all seven episodes yet. If you haven’t, I highly recommend that you do with your lights off and your mind engaged. Flanagan excels at delivering thrilling suspense with plenty of rich insights to digest for weeks afterwards and lingering questions about the nature of life and the afterlife to haunt you as effectively as any of his terrifying specters.

Midnight Mass begins with a tragic car accident. Riley Flynn (Zach Gilford) kills a young woman in a drunk driving accident and spends four years in prison for his crime. With nowhere else to go after his parole, Riley returns to his home on Crockett Island, a fishing village located off the shores of New England. Crockett residents are only connected to the mainland by ferry, and the community survives primarily on proceeds from the fishing industry, an industry which has fallen on hard times due to an oil spill. It’s a tight knit little community bound together by the local school and St. Patrick’s Catholic Church. Monsignor Pruitt has served as the spiritual leader of Crockett Island for generations. The aging priest is granted a sabbatical leave by the congregation so that he can take a pilgrimage to the holy land before he dies. The congregation is surprised when a younger priest, Father Paul Hill (Hamish Linklater), comes to the village with the news that Monsignor Paul is ill and recovering on the mainland. Linklater’s performance as Father Paul is brilliant throughout the series. He captures the dualism between the compassion and desperate inner conflicts of the character perfectly.

Of course, all is not as it seems. We learn that Father Hill is Monsignor Paul, restored to youth through drinking the blood of a demonic winged creature he encountered on pilgrimage. Hill/Pruitt believes the creature is an angel despite its grotesque appearance. Miracles ensue as Hill shares the creature’s blood with his congregation through the elements of the eucharist. The lame walk, the blind see, and the aged are restored to youth as the elixir runs through their systems. Unfortunately, these miracles come with a price. Flanagan has crafted a unique spin on the vampire genre by making the source of the transformation an unknown supernatural creature while retaining the traditional characteristics of vampires. The demonic creature feeds on blood as does anyone who is exposed to its blood long enough, and he also suffers vulnerability to sunlight.

Father Hill’s misguided attempt to help his congregation goes horrifically wrong as he guides the congregation to go through a full transformation during the titular midnight mass on the eve of Easter. Only a small group of parishioners escapes the transformation into blood-thirsty vampiric creatures who proceed to rip their loved ones apart. Soon the whole island is awash in violence as the survivors work to ensure that none of the infected people make it to the mainland. Led by Riley’s fellow prodigal and local schoolteacher Erin Greene (Kate Siegel), the survivors attempt a suicide mission to contain the spread and destroy the creature responsible.

There are more fascinating subplots and personal stories that pay off well in the final episodes than there is time and space to cover here. Again, the whole series is well worth the watch. The character that haunted me the most after the final episode was the fanatical Bev Keane played with explosive fervor by Samantha Sloyan. Viewers might recognize Sloyan as Nurse Penelope Blake from Grey’s Anatomy or from her guest appearances on Scandal, Parks and Recreation, and The Good Doctor. She also played Leigh on Flanagan’s The Haunting of Hill House. Her portrayal of Bev Keane warrants award consideration as does Linklater’s.

Bev lives her life as the quintessential church lady, serving as Monsignor’s assistant at the church and teaching at the local school. She is strict, critical, disciplined, and more than a little racist. People fear her rather than respect her. One of the highlights of the final episode is the moment when Riley’s mother Annie (Kristen Lehman) tells her, “Bev, I want you to listen to me. Because I think you’ve needed to hear this your whole life. You are not a good person.” Annie goes on to point out that Bev seems offended by the idea that God can love everyone else as much as he loves her.

Bev loyally protects Father Hill’s secrets and helps him procure blood for sustenance. As their deception and the violence escalate, Father Hill begins to question while Bev grows more committed. Her apocalyptic rants increase as she rattles off memorized portions of scripture to vindicate her actions. The story provides a chilling allegory of a phenomenon we witness throughout history. From the French Revolution to the rise of fascism and communism, we’ve learned over and over again that charismatic leaders who unleash the passions of fanatical populists have no idea how far that fanaticism will go nor are they able to control their followers once their passions are fully engaged and unleashed. The original leaders become prey themselves as the revolution consumes their own offspring. Bev turns on Father Hill by the end, labeling the originator of her path as an unworthy follower on the very trail he blazed himself.

With the transformed townspeople vulnerable to the rising sun, Bev decides to set fire to every building on the island. The destruction of all buildings on the island leaves only St. Patrick’s and its attached buildings as a refuge. Bev refers to St. Patrick’s as an “ark” that will draw all the residents to her for safety and indoctrination. She is willing to destroy everything else good the people of Crockett Island have built so that her cult will be the only safe harbor. To do so, she destroys perfectly good structures that could themselves offer refuge and safety. Her plans are derailed in the end by the group of survivors who set fire to St. Patrick’s as well, ensuring the doom of every transformed person on Crockett Island.

Bev’s fanatical quest to secure the primacy of her own way over all others stands as one of many haunting allegories that Midnight Mass holds up as a mirror to our troubled times. My current research on satanic panics and spiritual warfare beliefs has reminded me of how much fear dominated our collective worldviews in the seventies and eighties. We feared evil influences in toys, music, television, and books. Prosecutors pursued alleged cases of satanic ritual abuse, and high-profile ministers identified the “New Age” movement as a spreader of demonic influence. It seemed that everything one touched that didn’t have a Christian label allegedly carried some kind of evil. This type of Christian fundamentalism and fanaticism tends more towards ancient Gnosticism or Manicheanism than orthodox Christianity in its rejection of the created order as evil and advocacy for a strict cultural separatism. Its persistence demonstrates how those ancient belief systems found new hosts in some contemporary forms of Christianity.

Fanatical religion of any kind demands exclusivity and dominance at the expense of love and human flourishing. Its followers are willing to burn down perfectly good aspects of the world and cultures around us in order to fool people into thinking that the fanatical religious system offers the only hope for salvation, safety, and flourishing. One example of this problem today lies in the cooption of conservative evangelicalism and the Republican Party by the autocratic pseudo-religion of Trumpism. Bearing all the characteristics of a cult, Trumpism has convinced far too many Christians of all varieties that securing a handful of pet political objectives justifies compromising the core of their theological and ethical principles. Rather than deal with the complexity of life in a pluralistic world, Trump’s followers are all too ready to burn down our system and social structures because they fear losing their place in society. Ironically, burning down the system would mean they would lose it all anyway. Love and flourishing for all are sacrificed and an appreciation for the good things the created order offers is traded for an apocalyptic vision of a world shrouded in darkness in which evil forces are easily more powerful than either human virtues or possibly even the power of God himself. Who wouldn’t be driven to extreme behaviors viewing life through such a dark and distorted lens?

Bev’s desperate bid to make her brand the only game in town backfires, literally. So does fanatical religion when it throws shade on everything and everyone around it. Religious movements lose credibility when people who have heard negative things about the “other” actually get out and meet a few of those people. Turns out they were not as bad, desperate, miserable, add any other negative adjective, as the person was led to believe in their religious or social indoctrination. Fanatical religious movements that gain traction by demonizing others are not healthy for the individuals they recruit or the societies they inhabit. So turn out the lights, binge some Midnight Mass, and celebrate those forms of faith and fervor that emphasizes flourishing over fanaticism, freedom over fear.