Exvangelical: Moses had horns, the Bible tells me so 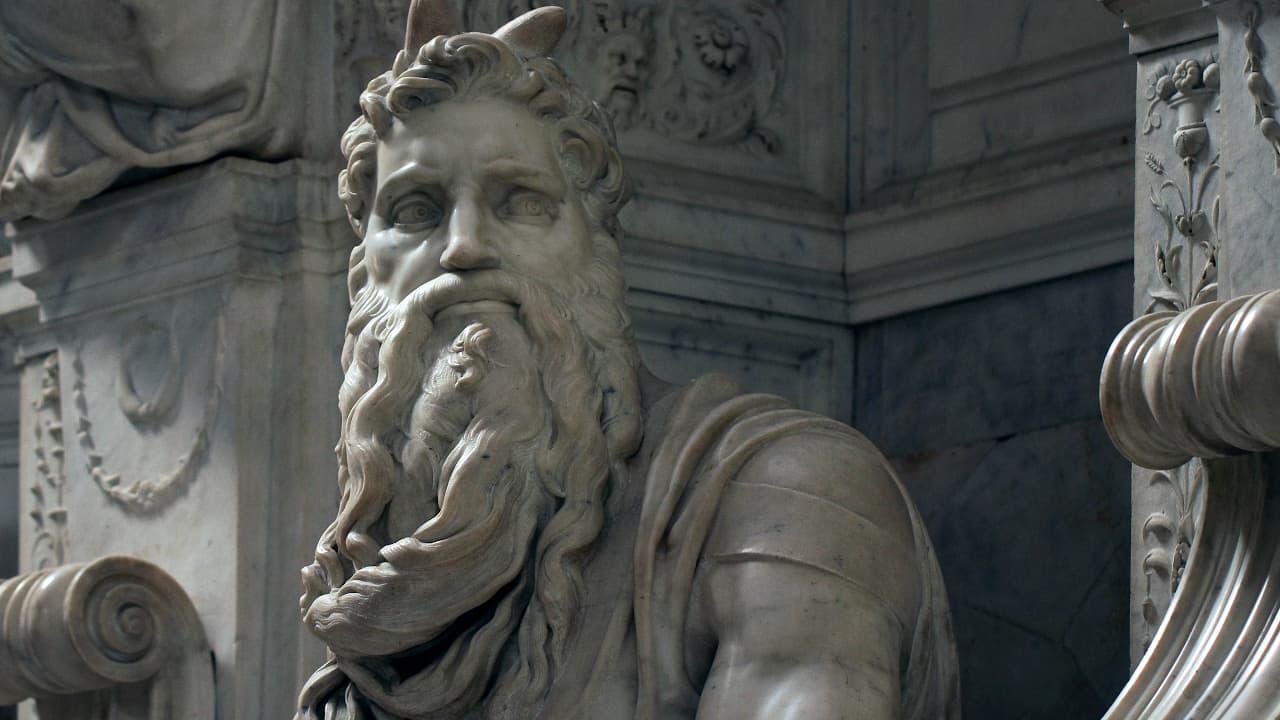 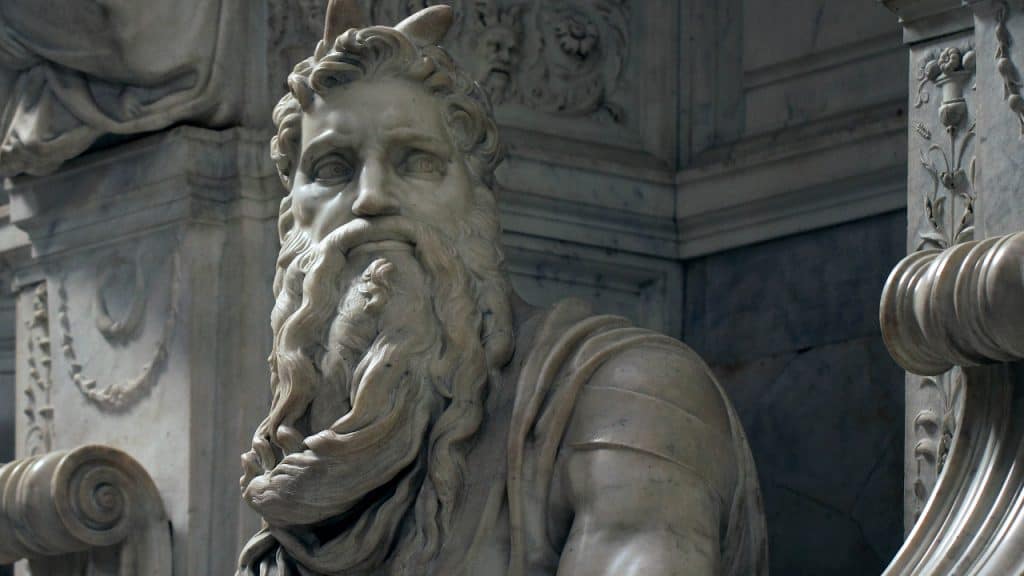 I teach art and art history at a religious, evangelical university. Every year, we have a fun discussion when it comes to pieces like Michelangelo’s Moses or Claus Sluter’s Well of Moses. Students often wonder why Moses has horns. If they don’t notice, I’m sure to bring it up.

The short answer is that their Bible told them that Moses had horns. The longer answer is that in Exodus 34 the verb form of the Hebrew word qeren is used. The word qeren most generally means horns. But, Hebrew, like many other languages, has words with multiple meanings. Apparently, the idea may have been that there is a visual similarity between horns and rays of light, so this particular verb form means “to send out rays.” That is essentially how we translate it now. The ESV reads, “his face shone.” The Septuagint translated the word in a similar way. But when Jerome translated the Vulgate, he translated the word literally and thus missed the meaning. As a result, horns became a part of Moses’ iconography.

So, what does this story have to do with the concept of exvangelical?

First, let me say that I don’t consider myself exvangelical. All the writers for Faith on View have roots in conservative evangelicalism. Some authors have eschewed evangelical as a descriptor. I have not. But considering my evolution, I am exactly the type of person who many expect to. Maybe I am just too stubborn. I was raised in a country Southern Baptist Church. I spent 45 years attending Baptist or similar evangelical churches. I’ve taught at three evangelical colleges, including the one I teach at now. I have left the Baptist church and consider an Episcopalian church my home, though I have not been confirmed.

When I look at David Bebbington‘s famed definition of evangelicalism, I still fit. But, it is often an uncomfortable fit. When I started this website in 2011, I called myself “uncomfortably evangelical.” That description is still used on my author’s page. When working on my Ph.D. in Berkeley, CA I began using the phrase “progressive evangelical.” For me, this terminology drew a line theologically separating from some of the things in progressive Christianity that I still am not in alignment with.

I’ve also resisted the term deconstruction, though in many ways it is appropriate. I prefer saying that I have reimagined my faith; I discuss this idea in my essay, “Deconstruction or Reimaging Faith?”

Part of my project here on Faith on View has been to advocate for the spiritual discipline of questioning. I believe God honors our questions and invites our curiosity. At the same time, I believe the Church often does not. If evangelicalism were a thing in the early 16th century, I could totally imagine a Renassaince kid in the local youth group seeing Michelangelo’s Moses after a bowling or miniature golf outing and asking “Did Moses really have horns?” Of course, the response from the youth pastor or one of the parent chaperones would respond, “Absolutely, The Bible says it, I believe it, that settles it.” But, it doesn’t.

The fact of the matter was that the translation was imperfect and it distorted the meaning. This obviously isn’t a central salvation doctrine, but it did lead to some odd bumps on Moses’ head for several hundred years. If nobody had examined if this was what the Bible really said, Charlton Heston would have worn an amusing prosthetic.

Evangelicalism has not done a good job of shepherding recent generations. We are reactionary, resisting new information, and often quickly calling questions heretical simply because they make us uncomfortable. It just seems to be our knee-jerk reaction. I understand why people reject evangelicalism. I see why people find it stifling to their pursuit of God. God is Truth, but the evangelical church is afraid to let us test and see if what is proclaimed true actually holds up as true.

In this defensive stance, we have also been too protective of our institutions. This has allowed abuse. We’ve seen it in the SBC sexual scandals of recent years. We saw it recently with Ravi Zacharias. It isn’t just physical abuse- it is emotional and spiritual. But, the same culture has allowed them all.

People have been hurt by the Church and rather than grieving that pain we too often defend the institution. In my own life the greatest pain and harshest betrayals have come from those who loudly proclaim their faith and who find a home for that violent faith in the evangelical church.

I’ve certainly had people suggest that I can’t be evangelical if I am at all critical of it. My own sister once asked me why I hate evangelicals. I don’t. But in her mind questioning means disrespect and hate.

To me, the situation is analogous to how I feel as an American. I love my country. But we are not perfect. I believe in being honest about those problems and working to make this a more perfect union. There are people who say if someone criticizes our nation they should leave. That is foolishness. It is the responsibility of all of us to make this nation better. That is what Americans have done since our nation’s founding.

Similarly, evangelicalism is my home. It is where I live and work. When it advocates for hate it breaks my heart just as when our nation does. But, I don’t want to leave. I want to work to make evangelicalism a more perfect faith tradition. I want it to be a tradition that loves loudly just as Christ did. I want it to be a tradition that is known by its love just as Christ admonished the Church universal to be known by its love.

While some people, no doubt, think I should be both an expatriate and an exvangelical, I’m too stubborn. I understand and am sympathetic to why many choose to migrate to different nations or different faiths, or even no faith. But for me, I can’t help but ask if Moses really had horns and using the exegetical principles I learned in evangelicalism to seek the truth. Ironically, one of those principles is the principle of questioning. Evangelicalism is a relatively new Christian faith tradition. It developed by questioning other traditions. Just as the Protestant denominations questioned Catholicism, and 19th-century evangelicals questioned the lack of religious fervor and activism of their time,  evangelicalism of the mid 20th century questioned the modernists and fundamentalists seeking a third path that eschewed the failures of its contemporaneous movements. Today, exvangelicals embrace that tradition of questioning. For some, that leads to migration just as it has generations past. For others, that leads to stubborn activism within a deeply broken and flawed yet beautiful tradition that hopefully is just going through an awkward and frankly ugly phase in our growth.